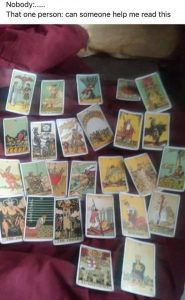 I don’t know who created this meme and even if I did I am not sure I would want to give them any credit*. Why? because to me it is indicative of a worrying trend I am seeing in certain parts of the Tarot community. The trend of mocking and gate-keeping.

Its also indicative that the meme maker was most-likely a little short on both knowledge and compassion.

What followed on the social media thread where it was posted was a lot of guffaws, laughter and out right piss taking. Here and there, one or two people said they felt sorry for whomever had posted it, others worried for the person saying it was s sign of a chaotic mind. I looked at it and went – Oh its almost a GT we could work with that.

So what is a GT (Grand Tableau/Große Tafel), well its a spread not often used in Tarot. Mostly found amongst Lenormand or Kipper readers it is a spread according to Cafe Lenormand that :-

“explains how you got to where you are at present, what you’re dealing with today (even what’s on your mind), and what will happen next. It will show external influences that you may not be aware of – such as a secret rival at work, a hidden health issue, or a friend lending you a helping hand. The insights the Grand Tableau gives you can help you to know what course of action to take to achieve the best possible outcome.

It’s an excellent spread for gaining an overall synopsis of your life and the months to come.” ~Cafe Lenormand

Normally a GT is laid out either as a 9×4 grid or as an 8×4+4 so as you can see this isn’t exactly correct but there is no reason why, with a little bit of lateral thinking, a sincere discussion couldn’t take place with the person who posted this and some semblance of a reading gleaned that would be both educational and helpful to all concerned.

But instead it was used to mock and scorn. I don’t know how you would feel but assuming this spread was a genuine one nabbed from one of the plethora of Tarot groups on social media (and there is no reason to assume otherwise because I have seen similar) if this was my photo and I came across this meme I would have been devastated. Maybe even devastated enough to put my cards away and not bring them back out again. And like that *poof* a potential Tarot star may fall into obscurity never to be heard of again. How sad. Shame Tarot community, shame, shame, shame.

So over the next week I am going to recreate this spread, use it as a teaching tool, not just to help all the people out there who have posted images like this on Tarot forums  – BTW keep doing it that’s how you learn – but also for those who were so quick to mock they forgot that they were once learners too. Remember that you’re never too experienced to look at things in a new way.

So look out tomorrow for Pt 1 of the Tarot Grand Tableau – A teaching tool!

*I will credit the deck however, thats only polite. It looks like the Centennial Waite by U.S Games but not being able to see the backs or get a clear look at the cards I’m guessing a bit here. Maybe some can come along and tell us.