Today I wrote the following statement:

This is not a new thought for me. Probably one of the earliest realisations I had that my world view did not fit with most of civilised society was the revelation that most people do not believe that animals have souls. That there is no after life (heaven if you will) for animals. I knew then and there I wanted no part of any religion that placed me in an afterlife without animals. Despite my apparently outgoing and gregarious nature my natural state of being is introverted. At parties and gatherings you will find me with the pets and the children (those wonderful humans who have as yet not forgotten how it is to be animal). I am quite animalistic in my nature I trust slowly, love fiercely and have unwavering loyalty. And because of this I truly struggle with many aspects of civilised society, the delicate nuances we are supposed to perceive, the intricate games we are supposed to play.

I am loathe to use certain vocabulary as it has been abused by the new age community and the cultural misappropriation of  such paths as the indigenous American population and their belief in totem and power animals make it even more difficult to express myself adequately. But I truly believe that connecting with the animal natures with yourself can make for a richer life both in the magickal and mundane realms. It is something our old Gods knew all about. Our Gods and Goddesses were often zoomorphic. Ceridwen knew how to change into a greyhound, an otter, a hawk and a hen. Dylan son of Aranrhod became a seal and returned to the waters. Rhiannon is made to take the form of a horse (or is it her natural form) as part of her punishment for the alleged murder of her son Pryderi. It is such a common phenomena that it might be argued that to be divine you have to access the animals within. Isn’t that an interesting thought, to become Godlike we must understand our animals. But how? 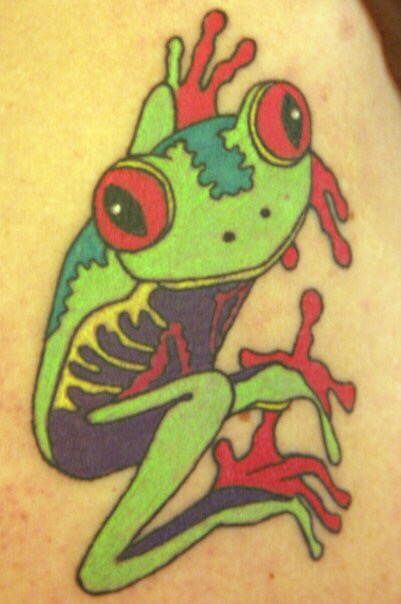 We can of course pay a small fortune to be taken on some Shamanistic journey to find our inner beasts. And I’m not going to decry that. It can work. But often our  journeys to find our “divine animal nature” can be far more mundane and internal. For example after a week long retreat many years ago I was informed that my “totem” was a frog, a liminal creature capable of existing between the worlds of earth and water, a psychopomp and wise one. The Druid animal Oracle has a wonderful image of a frog, the like of which you could find in any garden pond. It states that the frog brings medicine and can help develop “sensitivity to others, to healing and to sound through your skin and your whole body and aura”. To be frank I pretty much snorted at this description, the only thing I had in common with a frog was that when I sang I croaked. And yet I couldn’t shake a certain feeling of kinship.

When it happened it wasn’t some fabulous realisation of some wonderful aspect of my being that made the connection. It was a realisation of a darker aspect of my nature, an understanding and acceptance of my shadow shelf that finally allowed me to make that bond. The animal Oracle also says about the frog that “There is a hidden beauty and a hidden power in all of nature”. And there as I was quite a few years later, meditating on the idea that a frog had a “hidden power” when ‘pop’ sat on a rock in my interior landscape was a South American red eyed tree frog. Although not poisonous this frog is brightly coloured to shock it’s predators into thinking twice about whether or not it is a tasty snack. Giving it a superlative glamour. And although small it is a fearsome predator in its own right. In addition many of its cousins are poisonous, you squeeze one of them too tight, or hurt them in any way and there is at best a good chance you’ll have hallucinations, paralysis and seizures and worse case, if you try and eat one of these little fellows, well if they are going down they’ll take you with them in the most excruciating way possible. Now that I could relate to.

You see connecting with any animal aspect isn’t always about the nice things, let’s face it nature just isn’t nice and neither are we. I am very distrusting of anybody who comes across as too nice, too smiley, too spiritual, they are the ones who normally have the most to hide and so far Ive never been proved wrong. My lovely friend Kath told me over a decade ago that I had an instinct second to none. Something I used to dismiss. But it is a divine animal trait in its own right, for after all why is it that a perfectly placid dog can suddenly take umbrage at a specific human being? We’ve all seen it. They sense something that apparently we can’t. Or maybe we can, if we learn to embrace our divine animals. 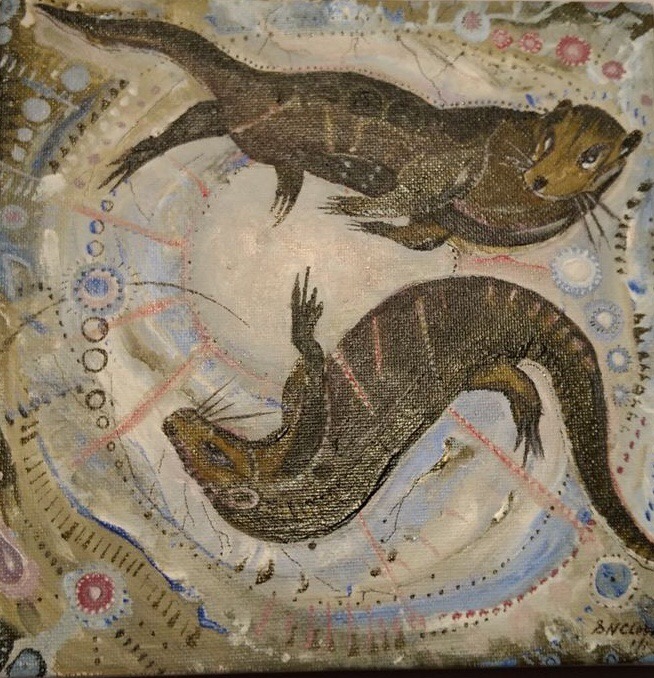 Sometimes the animals we are drawn to on the mundane are also teachers for us. My friends know of my passion for Otters. I call them my favourite water borne terrorists. Liminal like the frog existing between earth and water they are often associated with shape shifting and their almost immoral behaviour makes them tricksters of the highest order. They are mustelids meaning they belong to the same family as badgers, weasels, minks and Pole-cats. They are often social and playful, knowing the joy of play for the sake of play, expecting nothing more in life than what they have. Yet they can often kill for fun, not for hunger. They can be vicious and nip and bite, they can fight to the death. But all tricksters pretty much without exception are catalysts for change even if that is by viscous means.

Tricksters are highly intelligent, often seeing a bigger picture or path unavailable to others because they are blinded by dogma and social conventions. Hermes invented lying, and nearly all tricksters have an ability to be economical with the truth, as such the Otter is very good at letting you know when someone is lying to you, because if you’ve embraced that inner divine animal, you know a big whopper when you see one because you’ve considered telling the odd one yourself. Loki, another of the zoomorphic Gods plays a pivotal role in Ragnarok resulting in the death of the Gods. Again, if you’ve embraced that destructive side of your nature then it’s really easy to see when the walls are about to come toppling down. And of course sometimes you realise it’s necessary that you bring the walls down yourself. Anansi, Coyote, Kitsune, Gwydion, Efnysien, Reynard and Puck are all tricksters worth investigating, more than a few of them have a connection to an animal or a zoomorphic aspect. They can be the hero, the bad guy, the fool and the wise man all wrapped up into one. Yet you cannot deny their divinity, their connection to the sacred.

So here is a thought, perhaps the way to fix the world is to start behaving as if we are better than Gods and less than animals and work towards integrating those two aspects of our nature.