A ramble rather than a review – It started as a review but then meandered around a lot so bear with me!

It’s fair to say that once you get to a certain stage in your card obsession you will start collecting decks of all shapes and sizes. For example, last year I became totally fixated with the Etteilla cards in all their incarnations, I will do a blog post about them some day soon I promise.  Once you slip down the slippery slope of other cartomantic systems you will without a doubt finally stumble upon the ‘Gypsy’ decks. I know that the name Gypsy is problematic for some, but I am not going to make apologies for using the term in this blog or for the deck. Firstly, the deck is a product of its time and 100+ years ago when these cards first came into being things aren’t as they are now, if we cancel everything because the world was different then, we’ve got a problem in the cartomantic world and should probably just go back to reading playing cards!

Secondly I am acutely aware that the problematic nature of the name is very geographic, in parts of Europe there are those who see the name Gypsy as a racial slur and it’s led a lot of people worldwide to come out in support of that (quite rightly so – racism needs to be quashed), but here in the UK the nouns Gypsy and Traveller are the recognised names specifically requested by the Gyspy/Traveller communities. This is what they have asked to be known by officially, is it not wrong to try and cancel a name when members of that minority group wish it to be used? – just some food for thought (I’ve agonised over this and don’t have an answer I really don’t). Further consideration is that the author of this book clearly states that the “Romani have given it their own unique meaning” to this deck which implies strongly that the Romani have embraced and are using these cards and don’t seem to have a problem with them – just sayin’.

Anyway with all that said, you may remember I had a dalliance with the deck last year, doing my usual thing, trying to track down the origins and even looking for the instructions for the early decks to see if there had been any deviation in meanings during the decks lifetime. A frustrating process as there is so little written about it. You can understand then that I was absolutely beside myself with joy when I discovered a book on the subject was being released. “Reading Fortune Telling Cards – a Romani approach –  featuring the Gypsy Witch deck“, by Fabio Vinago (Published by U.S Games); it is as far as I am aware a first and in a heavily saturated market like cartomancy firsts are something to be celebrated.

I could not find much information on the author other than a website in Dutch, from which I gleaned that he has previously self published a number of books and decks. This is his first book in the English language and it’s a cute little thing just 125 pages long. Due to its brevity it feels like more like a LWB (Little White Book) than a comprehensive guide which is a shame as I think in my heart that is what I was hoping for. I was particularly intrigued by the idea that the book contained a Romani approach to reading the Gypsy Witch deck. The Lenormand derived decks of the early 1900s that came with names like “gypsy witch fortune-telling deck” and the “old gypsy fortune-telling deck” were for the most part created in America and are therefore relatively modern unlike the Romani culture and their use of playing cards which is not. Although some of the forerunners of the early “gypsy” decks were created in Berlin they only predated their cousins by a few years, my cynics head can’t help but wonder if what we’re seeing here in this book is an attempt to blend the unusual meanings in these peculiar, rather ugly and slightly problematic cards with Roma influenced playing card divination to give them a slightly more glamorous face and attaching a provenance to them that I am just not sure they deserve.

Anyway, in fairness to the author, he doesn’t claim that he knows the origins of this particular deck but there are several references within the book to the Romani people giving the cards “their own and unique meanings” but then offers neither research nor anecdotal stories to back this up – which just makes me desperately want to know more. Now, if you read Mary K Greer’s article on 19th-century American Lenormand decks she mentions that some of the early decks were published in both English and Polish which would make the connection back to the “old country” as it were, however I feel like I’m clutching at straws with this angle, I suspect that it’s more likely that the American Romani adopted these cards sometime in the last 100 years rather than having brought them over from Europe. So, currently all I can do is accept the statement that the Romani have given these cards their own unique purpose but in the absence or any further detail I do so with some healthy scepticism. I’d dearly love to know what makes this approach specifically Romani, hopefully the author will write more about this soon.

Moving on, let’s have a look at what we can learn from the book. The descriptions of each of the cards are detailed with an image of the card included an explanation about how you would actually read it both as a playing card and using the keywords associated with the image, layering the two together to make a comprehensive reading. Mostly the traditional meanings of the gypsy cards remain intact, so for example, ‘The Sun’ is very much happiness, success, popularity and joy – brilliant it matches, my brain can get behind that. However, when we look at the definition given for ‘The Moon’ what we are given are the meanings: happiness, emotions and work! There is no reference to work at all in the original instructions, so where did it come from? Enquiring minds need to know! 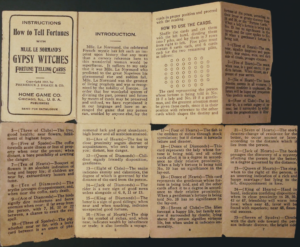 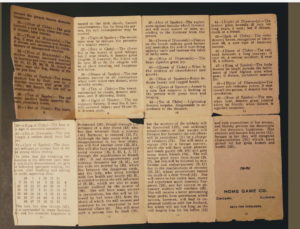 A copy of a 1903 set of instructions from a very very early gypsy witch fortune-telling deck and if you can peer closely you will see the original meanings.

Andy Boroveshengra also uses ‘work’ in the Lenormand interpretation of the moon card in his book 36 Cards, so are we seeing the Roma influence here? Perhaps, and let’s remember that just because it’s not in the original instruction booklet it doesn’t mean that we should ignore these other meanings, this is a different approach after all. Also included in the book are a number of spreads some of them the traditional ones that you will find in both old and new instruction booklets and some of them are very obviously ones that the author has either created himself or has learnt from the person who taught them (Did I mention I would have loved more research and/or anecdotal information?). Alongside this is an overview of the positive and negative cards in the deck and a detailed analysis of the person/court cards and finally a section on the ever popular card combinations that has taken the Lenormand community by storm in recent years.

All things considered, I don’t hate the book, it definitely adds something to the mix, it has everything you need to learn to read these cards and in more detail than the little pamphlet that comes with just the deck alone, so if you’re in the market for a new and obscure divination system it will make a good addition to your library. It’s certainly a saucy little deck that doesn’t pull punches – I’ve been known to use it when I work on the Psychic Lines because it’s definitely a “life” deck. I’m just so saddened that we did not learn a little more of the authors background, where and how they learnt this system, explanations for the deviations in meaning; it just feels like a missed opportunity. I wish I could read Dutch because it does look like the author has penned a slightly longer version entitled “De Complete Gypsy Waarzeg Set” which is available from Amazon in the Netherlands.

If you are interested I would suggest getting the English Book and Deck set can be found here (or at any reputable seller).