This time of year, we tend to focus on a lot of male-centric mythologies. It’s not surprising really, the Solstice is nearly upon us and the return of the dying sun is forefront in our minds, and thanks to our still predominantly patriarchal society the boys tend to get the plum jobs. In the next few weeks it is likely you will hear of Odin whose eyes were said to be the Sun and the Moon, of Llew Llaw Gyffes grandson of Beli Mawr (the sun himself), Mithras and the Holly King. All of them either literally or figuratively light bringers, but it doesn’t take too much digging before you start coming across something that is mostly ignored in modern Paganism, the female light bringers. This is a subject for which I have a great fondness and love. Deities, holy women and honored ancestors, such as Hekate Phosphorus, Diana Lucifera, and most apt for this time of year the Disir and St Lucia (or St Lucy) all rocking the light and influencing humanity as only women know how.

The Feast of St Lucy is on the 13th of December, which prior to the change from the old Julian to the Gregorian calendar would have fallen approximately on the Winter Solstice. In Scandinavian countries St Lucy is still venerated on Jol/Jul with young girls dressing in pure white, their dresses adorned by a red sash and a crown of candles upon their heads. She is quite an interesting Saint in that she is both a very devout woman of Christ and potentially also a Witch. There are numerous folkloric tales about her, and these are region specific, but the essence of her story is that she was the only female child of a rich merchant family in Syracuse Italy. As a young child she travelled with her ailing mother to a shrine dedicated to St Agatha to pray for healing. St Agatha it is said performed a great miracle of healing which led to the instant conversion of the young Lucy to Christianity. But there was a slight problem, as was common in that time Lucy had been betrothed to a young man whose family was Pagan.

During the intervening years between Lucy’s conversion and her final Martyrdom it is said that Lucy persuaded her parents to give her the money reserved for her dowry so that she could spend it on alms for the poor, particularly those persecuted Christians who were at the time living as outcasts in the catacombs of the city. She traversed the dark tunnels with food and blankets loaded in her arms, her way lit by a crown of candles which she placed upon her head. Eventually her suitor came a calling and Lucy rejected him, claiming a life of virginal chastity dedicated to God. Outraged (and also probably miffed at the loss of the dowry more than anything else) the young man appealed to the city governor claiming the girl to be a Witch, something it seems that the Governor chose to believe. What followed is a sorry tale of abuse. Lucy is first taken to a Brothel to be defiled, but the soldiers tasked with escorting her cannot move her, even when they tie her to oxen and try and drag her. Next her eyes were gouged from her head, although in some tales these either regrew in their sockets or more alarmingly on the palms of her hands and finally they tried to burn her at the stake but no fire could be kindled. Eventually she was stabbed and died.

St Lucy has now become the Patron Saint of the Blind and is often prayed to or included in folk magic to heal afflictions related to the eyes including the effects of the ‘evil eye’. But there are some other magickal connections, Judika Illes[1] claims that in Austria the term “Lucy’s light” is another name for having psychic abilities and that in Hungary St Lucy’s eve is considered the time most propitious for performing acts of divination. As a cartomancer St Lucy is to me someone who can bring me clarity in my psychic works, allowing my deep vision to grow and develop, and it is for this that I venerate her at this time of year. A simple candle is all it takes, which I anoint with Star Anise and burn for a short while every night between the 13th and Christmas Eve saying a short spell as I light the candle.

protect me through the darkest nights,

Bring forth my powers of second sight,” 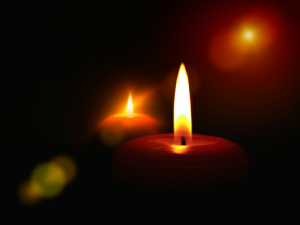