Although houses can be used to quite some success when combining Tarot with a Grand Tableau, it probably isn’t the best starting point for a learner. Directions and smaller clusters of cards on the other hand, people get those quite quickly and easily and can apply them with very little skill or experience required.

What follows here are techniques I have garnered from various sources, I cannot claim them to be my own, although how I am using them is. 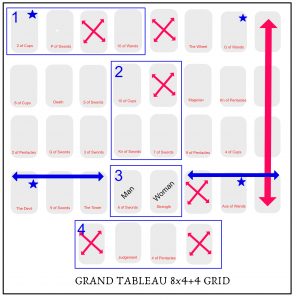 Box 1 – The overall meaning of the reading

2 of Cups, Page of Swords, 10 of Wands. A relationship is headed for troublesome news and quarrels, and the querent just can’t see the wood for the trees. This is the straw that broke the camels back.

Box 2 – The heart of the problem

10 of cups, Kn of Swords, 7 of Swords. Ohh boy we have the “happy home” matched up with the impulsive grudge holding knight with the pokey swords, he’s the only one in the deck who rushes away from the future, headlong as fast as he can, and what he is running from is the 7 of Swords, the Sneaky Pete card, if you think someones talking about you behind your back and this card comes up, then I bet a pound to a penny they are.

The 10 of cups is directly above the Knight so he is focussed on wanting that happily ever after even if it means making a few swift cuts along the way.

Box 3 – The querent (and their love interest if any).

6 of Swords, Strength. Although we are not using the house system it is really useful in a Tarot GT (and this interpretation of the original spread) to keep the “Man” and “Woman” houses, to represent the querent and the partner. It can give very interesting insight into each persons mindset and paired with the corner cards (marked with stars) can reveal previously unknown aspects to personality and intent. Here we have the “wife” studiously ignoring her husband in favour of her cat, the cat which we see echoed in the Queen of Wands, so “I ain’t saying she a gold digger but she ain’t messing with no broke” and the 7 of swords crowning her suggests she’s got a spiteful tongue and she’ll use it if she has too. Looking at the 2 of Cups, the Devil and the Ace of Wands I’d also be cautioning the “husband” to watch out she could use sex as a weapon too.

Judgement, 4 of Coins. We are starting to move into predictive reading here, which is great. This suggests an amenable outcome to the divorce with the powers that be literally ruling from above in favour of the querent, financial stability and the hard earned cash will be theirs.

Arrow 1 – What is behind them

The Devil, 9 of Swords, Tower. Codependence and toxicity are a trap of their own making, sleepless nights will only cease if you are prepared to make a change. They’ve done their thinking, they’ve acted and now its all done bar for the shouting. They’ve worked through the heart ache mentally and its time to move on. What we don’t get here now by not including the house system is that the paperwork has been drawn up which we would have seen with the Lenormand houses of “Book” and “Letter”, this is where Lenormand can be far more succinct and fusing the two systems is really powerful.

Arrow 2 – What is in front of them

The future is relatively unknown at this point because the querent didn’t lay a full spread. But one thing is clear, growth an opportunity will take a front and centre role in the querent’s life once all this muck and gubbins is over.  And if we are going to get a little crude, that great big wand is a waving, so he looks like he will get some.

The 4 corners (marked by stars) Additional details of note that can shed additional light on the situation, see explanation of Box 3

This has all been written from a male querent’s point of view, but what if this was a woman that laid those spreads, well we don’t get to chose our clients. Best case scenario they are just a bit spoilt and selfish in which case a blunt read may have just saved a marriage as it may have bought them time to self reflect. If they were a narcissist there would be nothing I could do, they would protest their innocence, stamp and shout, declare me wrong and not making a connection possibly. Until they contact me again a few months later for another reading! And therein lies the true skill of a Tarot reader 😉

So using techniques from another system we can adequately interpret what on face value looks like one red hot mess of a spread, we have allowed the newbie reader to consider “houses” which really aren’t so different from the titles given to various card placements in more traditional spreads associated with the Tarot such as the horseshoe, Celtic cross or Wheel of the year. We have allowed them so search for connections in the cards to see deeper meaning, and we’ve looked at directionality, past, present, future and boxing, all in a hap hazard grid layout. By examining both approaches we can see that the interpretations are not so different, but that combining the two gives a more detailed picture. Not a bad knowledge dump for a shoddy meme. Can I reiterate, please folks don’t stop posting these spreads this is how you learn ignore the negative nellies, they are not your people!

I truly hope this helps someone, maybe inspires them to pick those cards back up, or for once stays a scoffing tongue when they see a spread like this.