Hail Old Ones, Ancient Ones of Time and Space
You who were before the first breath and will be after the last ember
Spirits Who dwell in the void of spirit between the worlds and the stars
Who govern the motions of the stars and planets
Hail Indwelling spirits of trees and rock and lake
Hail Dryads, nymphs and fairies, guardians of sacred sites
– Magick without Peers, David Rankine & Ariadne Rainbird
– Capal Bann 1997

We use this invocation in Coven a lot. It’s a general invocation which ensures all the potential spirits regardless of their origins or place in the universe are honoured. Ensuring that the Spirits get honoured is a very important part of my rites and rituals.

Witches, Wizards, Druids, Shamans call us what you will are all very good at remembering to honour the “big”. We raise our arms in ecstasy and call down the Goddess or the God. At Samhain the ancestors get a look in. Normally with a glass of liquor and a bite to eat. Although I have been to a few rituals where this hasn’t been the case. At public rites, particularly the summer ones we tend to hear about the Genius Locii and the Spirit of the Corn. But that isn’t guaranteed by any stretch of the imagination.

It seems to be there is a disconnect in our minds between the importance of contact with spirits compared with that of deity. I’ve really thought long and hard about why this might be the case. With so many of us being nominal converts from other faiths, is it residual indoctrination? Do we place so much emphasis on “God” as a result of conditioning, that the Spirits are dirty things to be ignored if at all possible. I think this is a real possibility and one so ingrained into our western culture that we don’t even register that there is a problem. Certainly our folklore is full of stories where the primary focus is keeping the Fae away. And there is great merit in approaching the Good Folk with caution.

However, they can also be some of the most important allies we can ever have in our magickal world. If I want something doing, I am more likely to approach an angel, a daemon, a saint (yes a saint, remember they are just beatified ancestors and us witches are all about the ancestors – or we should be), a fairy or a spirit of place. Gods can be a little too abstract and requests to them (in my experience) tend to be of the long slow burn kind of outcome. And the result if not always how you imagined it. Whereas some spirits seem to have a good handle on the human condition and come up with the goods swiftly and reliably. So building strong relationships with all the spirits of the other are just as important as the relationships we build with our Gods. 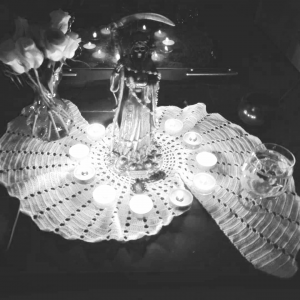 I give thanks to Our Lady of the Holy Death. Santissima Muerte. Who manifests the will of the divine and gives blessings

As part of this relationship building I think it’s very important that we write our own invocations. Not just big flowery charges used in circle, but also the smaller more personal ones used on a daily basis. This simple exercise makes us really think about the spirits around us, how we interact with them and what that means. Its not an arduous task and I try and write something personal for every spirit that I work with. I write my invocations on index cards. They are small and portable. A bit of blue-tak on your dash can secure the card so its the first thing you see (and say perhaps) before heading to work. Sat on your beside table it can be the last thing you see before bed. You can even prop it on an altar or devotional space. Perhaps decorate it with a border. Or drawings of the spirit you are working with. The effort and the intent will be appreciated and your connection will be stronger.

You will also be pleasantly surprised how quickly you can memorise something relatively complex when you approach it like this. 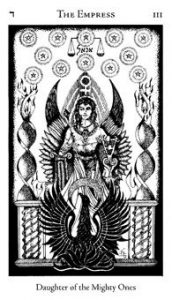 One of the biggest benefits of a training coven is that you never get stagnant. New people bring new thoughts, opinions, and experiences. Facilitating this kind of environment also means you have to be completely sure of your facts, because there will always be a neophyte who will happily shout up if you are wrong. And long may that last. The ability to question, to challenge, to ask why, is probably the most important characteristic of a successful witch.

What this means for me is that I spend a lot of time looking historically at why we do things. I also analyse the effectiveness of our practises based upon this information. I’ve recently been doing a lot of work deconstructing the traditional circle cast and the stock liturgy involved in Wiccan ritual. My current obsession being the subject of the “Mighty Ones”.

I don’t think I’m the only one to have considered this conundrum at length either. Raven Grimassi, Christopher Penczak and Deborah Lipp have all debated the concept in more or less detail. I rather love Deborah Lipp’s statement in her book ”The elements of ritual”

Although I have worked with them in ritual for years, I know little about them, because the nature of the Guardians is elusive.
– The Elements of Ritual 1961

I suspect different covens have different ideas about these beings. The decentralised nature of Wicca is both a strength and a weakness; each group works with and develops that which they find most important, so what is sacrosanct lore to one may not even be discussed by another. As a result this isn’t an area that I have examined closely until now.

In 1949 Gerald Gardner published ”High Magic’s Aid”. A fictional story which has some very familiar passages. Gardner claimed to have written it as a work of fiction because his High Priestess had vetoed the idea of a non-fiction work about Witchcraft. In chapter 16 entitled The Making of the Great Circle, one of the protagonists casts a circle so familiar that it could be recognised by pretty much any neo-pagan today, regardless of their tradition.

”I summon, stir, and call thee up, thou Mighty Ones of the East, to guard this circle.”

At each of the cardinal points an invocation to the Mighty Ones is proclaimed. And in the following chapter the Priestess Morven also declares:

”I will in sooth call up the Old ones. The Mighty Ones, to be present and witness your Oaths.”

In 1978 Doreen Valiente publishes almost exactly the same words in her seminal work ”Witchcraft for Tomorrow”. However, now she uses the term Great Ones and Mighty Ones interchangeably.

”Then take up the bell, and pass again round the circle, starting at the east. Call upon the Great Ones who have gone before, saying:
I summon, stir and call ye, ye Mighty Ones of the East, the guardian spirits of witchdom, to witness these rites and to guard this circle

Now we are presented with an additional layer of meaning. Valiente’s words imply both ancestral aspect and a very specific link to those who practice the craft. Our Mighty Ones are no longer just elemental powers. They are our Witch mothers and fathers (whomever they may be). This concept is taken one further by David Rankine who suggests that:

We use the term Old Ones collectively to describe the spirits which govern the motion of the universe, the order of the stars and planets, as well as the spirits to be found in our environment around us, such as genius loci (“spirits of the place”), guardians of sacred sites, dryads, hamadryads, nymphs, fairies etc. The Old Ones are sometimes called the Timeless Ones.
– Magic without Peers, David Rankine & Ariadne Rainbird 1997

The concept of the Mighty Ones isn’t just Wiccan though. The Golden Dawn book on tarot known as “Book T’ give the Empress the title Daughter of the Mighty Ones. The Ceremonial Magician Madeline Montalban suggests that these beings are The Watchers.

The Mighty Ones are often called “The Watchers”, occult beings who dwell “in the spaces between the stars”, and whose task it is to see that nobody interferes with the rhythm of the Universe, expressed in occult symbolism as wheels within wheels.
– Prediction, March 1961

She believed that these watchers along with their daughter The Empress were in essence a kind of Guardians of the Galaxy trio intent on ensuring that pesky black magicians and ne’er do wells of the Occult world didn’t get their wicked way.

To prevent this kind of thing on a Uni­versal scale, ancient occult law said there were the watchers, who lived in the Four Watch-towers, and that these Watchers had a daughter, now known as “The Empress”, or the Daughter of the Mighty Ones.

Her occult duty was to help counter­balance the disturbances that might occur through man’s intrepidity (or impudence) in occult practice (since in those distant days, science and the occult were not divorced).

An interesting concept. Especially as it then provides a possible solution as to why Magick sometimes doesn’t work! But I digress.

The Empress is the 14th path on the Tree of Life between Chokmah and Binah. It is assigned to the Hebrew letter Daleth, which means door. As it can be argued that each watchtower is a doorway; then it is not unreasonable to assume that the Mighty Ones of that doorway are the Primal Masculine and Feminine principals associated with each element. Truly Mighty indeed.

So when building the visualisations in our circles, instead of one Guardian perhaps we should be looking at two? Or maybe even three? Hey! some of the Trad-crafters have been intuitively doing this for years. They may be on to something.