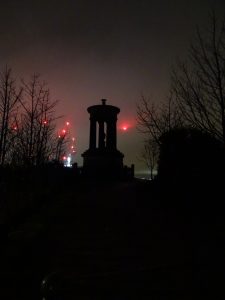 I love Edinburgh; country girl that I am, it’s probably the only city that I have ever visited that I could consider living in and as such it holds a very special place in my heart. It is a city that is still truly old and is steeped in myth and legend. Body snatching, half-men, wicked women selling babies, you name it, Edinburgh has it, and best of all, it has more than its fair share of Fae.  So it was an absolute delight to visit this weekend for my birthday treat. And even more of a delight when I discovered another variation of the tale of “The Faery boy of Leith” thanks to the very welcoming people at the Wyrd Shop on Canongate (which is well worth a visit by the way if you are heading to town).

The version of the story that I have previously heard dates from approximately 1660. And places a young boy  who it is said was gifted with strong second sight centre stage in the tale. Each Thursday night he would walk up Carlton Hill and disappear between two gates that were said to apparate at his approach. Despite numerous attempts to stop him or to follow him the boy could never be caught until he reappeared again at dawn. When questioned as to what he did during this time the boy stated that he was playing the drums for the Fae folk to entertain them during their revels. Further questioning regarding where it was he actually went, he would sometimes claim that he had been taken to France or Holland either through flight or underground tunnels.

However another version places the boy just a mile or so away in the caves in Arthurs Seat. This impressive peak can be seen clearly from Carlton Hill in the old town, and has long been associated with supernatural happening including a visit from the half fae/demon wizard Merlin and (like Alderley Edge and several other locations in the British Isles) said to be the final resting place of the once and future king himself, along with his knights of the round table.  That there are are tunnels below the old city is true without a shadow of a doubt, some have other folk lore of their own including the tale of the “demon hand”. The caves below Arthurs seat are also undisputed, and neither is the fact that they have been associated with unusual phenomena including housing the coffins of 17 poppets, which may have been meant to represent the victims of Edinburgh’s most notorious serial killers Burke and Hare. In this new rendition the Fair folk speak to the boy and ask that people no-longer call them “Fairies” within direct sight of Arthurs Seat, for to do so makes them “less”.

Although this request to avoid the F word is not surprising as the Scottish Fair folk have an established history clearly showing their dislike of the word Fairy, it’s the claim that to use the word makes them somehow less that is intriguing. Less what? Less powerful? Less present in this world? Less tolerant of us and our behaviour? Less in numbers?

Naming is very important of course we all know that; its Fairy lore 101 and I would never assume to use the F word directly to any entities face when out and about on my adventures, but I have never shied away from using the F word when talking to other people, but my twisted brain is now wondering; is the request by J.M Barrie’s Tinkerbell for us to declaim loudly that we “do believe in fairies” actually perversely the thing that is killing them off? Do we need to be avoiding the word altogether?

Whilst I am blogging and writing, probably not, mostly because its a powerful word within human consciousness, and when I am writing, its humans I am interacting with; but I’m going to put some thought into this conundrum and in the meantime at the very least I will be avoiding using the F word whilst out and about just incase I am overheard.