I cannot remember the first time I became enchanted with the idea of the “other” being real. I often tell the story of the fairies at the play park when I talk about my connection with the Fae but when I take time to examine it (as I have done very recently), there is a sense that my relationship began as a combination of factors rather than one pivotal moment. I grew up in a home filled with fantasy and science fiction in a time when fantasy and fiction weren’t really mainstream reading material. The Sci Fi section in both WH Smiths and the local library rarely extended beyond one or two shelves on a bookcase, but my dad and I could spend hours together choosing our books, it was our special time, sacred. I blame my dear old dad for my love of books and my reading tastes because of it; in my teens when my friends were completely hooked on Sweet Valley High, I was memorising the “Litany Against Fear”.*

I suspect I read hundreds of books growing up, although I never counted. There was one summer break where a friend’s mother handed me several carrier bags with about 40 books contained inside, mostly historical romances. I took to my bed to read, only rising to eat, relieve myself, and occasionally shower. I was a teenager and a filthy mutt, please don’t judge. There I stayed for the entire 6 weeks, the unread stack on one side of the bed slowly shrinking and read side growing. My parents despaired, but at least I wasn’t out getting into trouble somewhere, so they mostly suffered my withdrawal from the world. 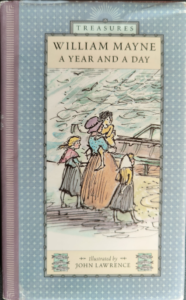 Despite my voracious appetite some books stuck rather than fading into the morass, one book from my childhood stood out for me over and above all others, so clearly that even decades later as I was writing Urban Faery Magick it became a bit of an obsession. I purchased a copy and it sat on my desk throughout the entire process. It was often the book I reached for if I wanted to relax, to tune out and escape the world. Guess what? its a fairy story and a really jolly good one too. It’s the story of two Cornish children and their family and what happens when they find and take a Changeling into their home. Its filled with little snippets of lore wrapped up in a children’s tale, its funny, its heart warming and its so sad that it’s haunting. I am convinced that had I not read that book as an impressionable young child I would not be interested in the subjects I study and write about today. A work of fiction is responsible for and has informed my practise, gasp horror! Never again will I roll my eyes at the “Mists of Avalon” brigade.

BTW – If you’re interested the book is called “A Year and a Day” by William Mayne, it’s a little dated, but an enchanting read so if you happen upon a copy somewhere grab it, it won’t take you more than a hour, two tops. 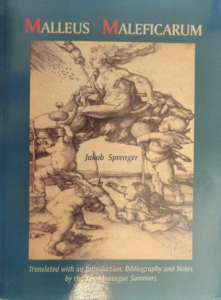 Why am I writing about this today? Well today I was accused of being evil because I have read (and recommended that someone else read) the Malleus Maleficarum. In fairness it is a document written by a religious zealot who was so vile that he was in essence single handedly responsible for the majority of deaths during what we now call the “Burning Times”. This was a time in history when somewhere between 60 and 90 thousand women, and more than a few men across Europe and the Americas were accused of witchcraft and/or heresy and then put to death. In some countries this was by burning, but it was just as common to be strangled or hung or both! Some excitable folks have suggested that it was 100’s of thousands or even millions but the academic evidence does not support this, the numbers however are horrific enough without the exaggeration so I don’t want to detract from what happened. That is not the purpose of this post. 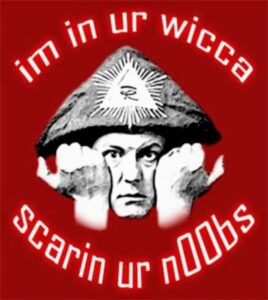 Despite its awful history, the Malleus Maleficarum and subsequent documents such as James I’s Daemonologie give us a unique insight into the world during that period and like it or not, in books like these we can see little snippets of magical practises used even today.  Sorry folks, I know it’s uncomfortable, but forget Crowley, there’s demons and witch hunters in your Wicca! and you know what, that’s absolutely OK, because if we stop examining our history, if we stop taking what works from it and refining it, then we are bound to make the same mistakes in our future – we become stagnant.

If we declare a book or a set of teachings wholly fictional or worse still wholly evil then that is the path we are destined to tread, one of wilful ignorance doomed to repeat history time and time again. Instead if we read, and learn about history from all angles in an objective manner we can see how to move forward. From there we can innovate, improve and help others do the same. No book is evil, regardless of how distasteful it is. A book does not have a morality in and of itself, after all they just contain words, the morality comes from those who read it and how they act upon the words inside. Books aren’t evil, people are, and sticking your fingers in your ears and pretending that they never existed it foolish at best, and at worst downright disrespectful to those who suffered as a result. You want to be a “witch”, then learn what it meant to be accused of being a witch, learn what you were supposed to be able to do (you might be surprised) and honour the poor souls who passed by ensuring you are informed enough to never let it happen again!

* “I must not fear, fear is the mind-killer, fear is the little death that brings total obliteration, I will face my fear, I will permit it to pass over me and through me, and when it has gone past, I will turn my inner eye to see its path, where the fear has gone there will be nothing, only I shall remain” – The Litany Against Fear, Frank Herbert Dune. That is some deep shizzle right there, but I  might talk about that on another day.