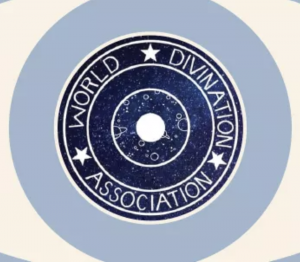 A fortnight ago I got to attend the very awesome World Divination Association (WDA) 1st Annual Virtual Conference. Yes as a title that is a helluva mouthful, but that jam packed moniker properly represents the jam packed content that was presented over the weekend. 44 speakers in 48 hours, it was the COVID-19 version of a 90’s telethon. Many of us staying up past our normally very sensible bedtimes to listen live to the great and good from all over the world. And ask questions too! Liz Dean, Mary Greer, Alison Cross, Caitlin Matthews, Ciro Marchetti  & Donnaleigh Rose were just a few of the speakers, plus a whole bunch of other folks whom I didn’t know then, but I am surely following now.  If you are interested they’ve made the talks available offline for a very reasonable fee, and you are bound to find something that is your cup of tea. Including a talk on Tasseomancy!

I’ve never been a very active member in the Tarot Readers and Cartomancy community and although over the years I have done endorsement programs for associations like TABI and BiddyTarot I tend not to get massively involved in the day to day chit chat. I never know what’s hot and what not amongst readers. Lenormand for an example pretty much passed me by when everyone was raving about it, I came to it years later in my own sweet time as the culmination of a natural course of study rather than some social influencer or group making it popular. But I do wonder now if I have been missing out. Anyway, one deck got mentioned  A LOT during the course of the weekend (well several did, but we will stick with just this one for the time being). The Gypsy Witch Fortune Telling deck. It’s a quirky little deck, its not Lenormand, its not playing cards, and its not Gypsy cards either. And yet somehow its a little bit of all three. 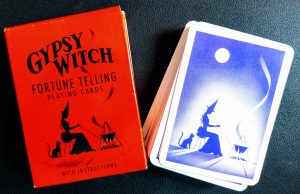 Published by US Games

A friend who also attended the conference described it as “the wild west of decks” and that couldn’t be more perfect a description. Currently published by US Games, this little deck can be bought for only £7 on Amazon (approx 6 USD). They are a 52 card poker sized deck perfect for a hand-bag or ruck sack. They have been around in some form or another for approximately 120 years, which makes them just a little bit older than the Rider Waite Smith deck. Cool huh!?! They are the result of German Lenormand emigrating to America, emancipating and getting its own identity. As an expanded 52 card deck only 35 of the cards could be considered to match the traditional Lenormand imagery, and then only just. The Garden is the Park, The Tower is “The Tower surrounded by clouds” etc. The Cross doesn’t even exist. Not to mention the fact that the playing card associations have been switched up. In addition I can’t not mention the fact that the cards are seriously ugly, they make Blue Owl Lenormand look pretty and worse still the ubiquitous ‘Little White Book” has no interpretations at all and yet there is a charisma about it you cannot ignore. If it was a boyfriend, your mum would call him “pretty ugly”. It makes for a quirky read. 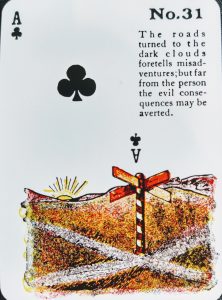 The Roads turned to Dark Clouds a literal interpretation

Ive been doing my usual obsessing with a new deck, devouring everything I could find on the subject, living with the deck in my hand 24/7 for the last 10 days and the idea of it being Wild West, a Cowboy deck if you will, is really starting to ring true. Nobody really seems to agree on the exact nuances of reading this deck other than its a ‘quite literal’ and a bit ‘directional’ and sometimes ‘situational’.  However its the most direct, shoot from the hip, draw first ask questions later deck I have ever used. In a recent spread the past section of the reading was so scarily accurate I had to ask for a second opinion to make sure I wasn’t just projecting. I’ve never been a big “fortune teller” but I can see me using this this when people desperately want a yes/no reading because this deck is perfect for it. Its short sweet and oh so to the point I thoroughly recommend you give them a try.

I’d also recommend you give the WDA a go, they have courses on everything from Mexican Loteria to Russian Cartomancy. It’s been a long time since I’ve felt so fired up and inspired and all because I got reminded that there is more to life than Tarot…..gasp horror!

1 thought on “Are you a Gypsy Witch?”