“She devoted her genius to the Work. With incredible rapidity she picked up the rhythm, and with inexhaustible patience submitted to the correction of the fanatical slave-driver that she had invoked, often painting the same card as many as eight times until it measured up to his Vanadium Steel yardstick!”

― A. Crowley, The Book of Thoth

Ancestral Spirits play a huge part of Pagan and Magickal world view. For me this isn’t just blood Ancestors, although I’ve got a couple of pretty exciting ancestors in my history. If my fathers tales are to be believed my family line includes a Scottish Cattle raider and a sailor who went with Columbus to find the New World. But that is by the by. I also believe that our political, religious, spiritual and magickal ancestors should also be venerated. Their lives, their work, their struggles, have all contributed to who I am now. Had Emmeline Pankhurst and her sisters never been born I would not have been able to vote in our local elections last week. Thats worthy of rememberance. 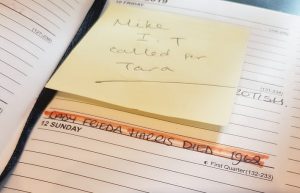 Without Gerald Brosseau Gardner, Philip Peter Ross Nichols (who I have recently discovered went to school in the same village I grew up in) or Orrell Alexander Carter (Alex Sanders) I would not have the religious and philosophical view that I have. They are another form of ancestor. And I also venerate them accordingly. As a result my personal diary doesn’t just contain the important dates relating to family and friends it also lists the birth and death dates of other important people. This week we have the anniversary of the death of Helena Blavatsky and Frieda, Lady Harris. Both movers and shakers in the Occult world in the last 150 years.

I shall leave Mdme. Blavatsky for another day because her influence on the world probably deserves several posts dedicated just to her alone. But Lady Harris is currently of great personal interest for she, along with Moina Mathers and Pamela Coleman Smith form a Triad of talented mystical women who have shaped the face of the world of Tarot. One of my life’s great passions.

Much of late has been done to recognise Pamela ‘Pixie’ Coleman Smith and the part she played in the Rider Waite Smith deck. And not surprisingly because its is probably the most popular deck in the world. I know very few readers who didn’t start out life with some variation of this deck. But two other decks have also shaped the world of tarot, although they are somewhat less talked about. Possibly because their symbolism is a little bit more obscure, a little bit more abstract, and at times dare I say it, more beautiful.

The Thoth, sometimes called ‘The Aleister Crowley Thoth’ is to me as much the work of Lady Harris as it is of the Great Beast, as Crowley liked to call himself. And it is said that this deck is the stunning, complex, detailed and deeply occult deck it is today because Frieda encouraged Crowley to add his own knowledge and imagery to the work rather than just creating another derivative Book T inspired Tarot deck.

Born in 1877 Marguerite Frieda Harris seems to have lived the first half of her life in relative comfort and respectability. The daughter of a Surgeon she went on to marry an MP of the liberal party who thanks to a baronetcy awarded in the 1930s was entitled to call her self Lady Harris. There is an interesting quirk regarding this title. As the wife of a Baronet she was entitled to use the name Lady before her surname, so in formal situations she could be introduced ‘Lady Harris’ but in more informal situations she could not be called ‘Lady Frieda’. Thus when discussing her it is correct to call her Frieda, Lady Harris. However this didn’t seem to stop her from ‘adopting’ the name ‘Lady Frieda’ and it seems to have stuck. It’s not very common to read articles or listen to discussion involving her that use her correct title.

Although an apparently quite private conventional person, in my opinion this little quirk alone is indicative of a more free spirited personality hidden underneath. The fact that at the age of 60 she took up with the man who was known as ‘the wickedest man in the world’ to paint the most amazing tarot deck ever created cements that belief in my eyes. What is it they say, behind every strong man there is an even stronger woman and I truly believe that to be the case when it comes to Coleman-Smith, Mathers and Harris. 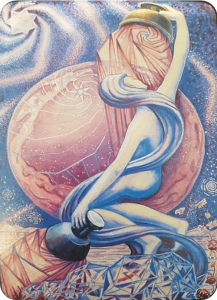 She was obviously a deeply loyal woman, she continued to care for Crowley supporting him both physically and financially right up until the end. She used her connections to promote gallery exhibitions of the original artwork for the deck. Helped finance the first run of 200 decks, and as a woman of means even paid Crowley an allowance to allow him to pursue his work in the Occult. And when his body (and many friends) failed him she provided nursing care. Finally she then gifted the original artwork to Crowley’s secretary Gerald Yorke before moving to India to live out her days.

Travel well Lady Harris,  daughter of the firmament, may your artwork continue to inspire students of the Tarot and the Occult for generations to come.