This year has been very much about me challenging my beliefs and why I do certain things. Ive been trying simultaneously to pare down my practise cutting out the unnecessary whilst also *upping my game* magically with a deeper understanding of things that I have just previously taken as the ‘truth’. Partly this is because I am teaching a lot more than I have done previously and there is nothing like new eyes to make you challenge how you understand and practise things. Partly because I feel that people should periodically examine their beliefs, practises, habits etc. It is in my opinion necessary for strong, well adjusted personal growth.

So I am sitting here on a glorious spring morning. The birds are singing and I am contemplating. This evening is May Eve or Walpurgisnacht. The beginning of Summer. Tomorrow is Beltane or Calan Mai. Quite an important festival for me but maybe not for the reasons that most people would assume. For the kindling of the Bel fire is to me representative of the kindling of the fire beneath the Cauldron of Inspiration. And it is the time when my work with Ceridwen begins. Beltane through to Samhain after all would have been the prime times for collecting herbs for a magickal brew.

This time would also coincide with the battle between Gywn Ap Nudd and Gwythyr Ap Greidol for the hand of Creiddylad. A battle that is to be fought “every May day forever from that day forth until Judgement Day”.[1. How Culhwch Won Olwen – The Mabinogion Oxford University Press] This battle is one that within my ritual landscape persists until Samhain where the balance tips back into Gwyn Ap Nudd’s favour. This tipping of the balance is the tipping/cracking of the Cauldron, the time of the ‘chase’. For within my personal and geographical ritual landscape it is easy to see the Goddess during the darker months in her many zoomorphic forms. Rushing helter skelter along with the wild hunt across the wind swept peaks of the Berwyns at the very tip of the Clwydian range, down into the Dee Valley, and onto the White Kingdom and Llyn Tegid as she runs down the boy Gwion Bach.

So Beltane and Samhain are intrinsically linked. Points in my ritual year where the veil thins, and time and reality warps. Our Gods and Goddesses change shape, events happen perpetually and simultaneously. And both points are triggered with with the kindling of a fire. This fire is often called the Bel or Need fire and it is often said that it must be kindled by Nine sacred woods. I realised I didn’t know where these nine woods came from or why it was important to use them so I thought I would have a good look around and try and uncover some sources.

The first and easiest source is of course the neo-pagan poem entitled rather erroneously as ‘The Rede of the Wiccae’. Without getting into a whole debate as to why this isn’t actually the same as the Wiccan Rede lets just take it as red that this delightful piece of popular culture has little to do with initiatory craft and move swiftly onwards. Within this poem is the following line:

“Nine woods in the Cauldron go,  Burn them fast and burn them slow.”

After which nine of the Ogham woods are listed. But as this poem dates probably no earlier than 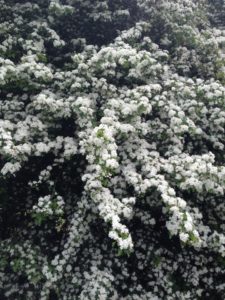 the 1970’s I thought I would try and find other provenance for the nine sacred woods. The Cad Goddeu (or Battle of the Trees) which in its written form  dates from somewhere around the 9th-10th century does mention nine trees, or forms related to the creation of the flower maiden Blodeuedd by Math and Gwydion. [2. Kat Goddeu – Legendary Poems from the Book of Taliesin CMCS Aberystwyth] But it also lists many more than nine during the actual battle part of the poem. So whilst the imagery of the flower maiden is a very fitting ritual motif for the folk practise of bringing in the May, it doesn’t really enlighten us any further as to the origins of the sacred woods.

The following poem attributed to Ossian a legendary Irish bard provides us with many woods, some of which have explicit instructions not to burn. The remaining woods either come with warnings, an explanation of their qualities or an explicit instruction to burn. This curiously leaves us with Nine woods. Being Rowan, Briar, Alder, Whitethorn, Birch, Aspen, Ash, Holly & Yew.  Not all of these choices are ones that automatically spring to mind as part of a Bel or Need fire.

O Man that for Fergus of the feasts dost kindle fire,
Whether afloat or ashore burn not the king of woods.

Monarch of Innisfail’s forests the woodbine is, whom none may hold captive;
No feeble sovereign’s effort is it to hug all tough trees in his embrace.

i>The pliant woodbine if thou burn, wailings for mis-fortune will abound,
Dire extremity at weapons’ points or drowning in great waves will follow.

Burn not the precious apple-tree of spreading and low-sweeping bough ;
Tree ever decked in bloom of white, against whose fair head all men put forth the hand.

The surly blackthorn is a wanderer, a wood that the artificer burns not ;
Throughout his body, though it be scanty, birds in their flocks warble.

The noble willow burn not, a tree sacred to poems ;
Within his bloom bees are a-sucking, all love the little cage.

The graceful tree with the berries, the wizard’s tree, the rowan, burn;
But spare the limber tree ; burn not the slender hazel.

Dark is the colour of the ash ; timber that makes the wheels to go;
Rods he furnishes for horsemen’s hands, his form turns battle into flight.

Tenterhook among woods the spiteful briar is, burn him that is so keen and green ;
He cuts, he flays the foot, him that would advance he forcibly drags backward.

Fiercest heat-giver of all timber is green oak, from him none may escape unhurt ;
By partiality for him the head is set on aching, and by his acrid embers the eye is made sore.

Alder, very battle-witch of all woods, tree that is hottest in the fight
Undoubtedly burn at thy discretion both the alder and whitethorn.

Elder that hath tough bark, tree that in truth hurts sore;
Him that furnishes horses to the armies from the sidh burn so that he be charred.

The birch as well, if he be laid low, promises abiding fortune ;
Burn up most sure and certainly the stalks that bear the constant pods.

Suffer, if it so please thee, the russet aspen to come head-long down ;
Burn, be it late or early, the tree with the palsied branch.

Patriarch of long-lasting woods is the yew, sacred to feasts, as is well-known ;
Of him now build ye dark-red vats of goodly size.

Ferdedh, thou faithful one, wouldst thou but do my behest :
To thy soul as to thy body, O man, ‘twould work advantage. [3. Song of the Forest Trees – The Poem Book of Gael]

A Scottish poem which can be found in the Carmina Gadelica [4. Carmina Gadelica – A compendium of folklore and prayers and poetry from the late 19th & early 20th century.] provides eight woods under the title “Choice of timber”. This list only has a few commonalities with the earlier list however, which isn’t very helpful. However the ‘feel’ of the poem certainly feels more magical.

Academia is ominously quiet about the components of the Need or Bel fire. However Professor Ronald Hutton mentions it in Stations of the Sun calling it the tein-eigin and goes to some length as to how various methods were used to kindle the fire. He also provides an excellent description from Marie Trevelyan in Glamorgan in the 1830s who stated that:

“Nine men would turn their pockets inside out, and see that every piece of money and all metals were off their persons. Then the men went into the nearest wood and collected sticks of nine different trees. These were carried to the spot where the fire had to be built. There a circle was cut in the sod and the sticks were set crosswise. All around the circle the people stood and watched the proceedings. One of the men would then take two bits of oak, and rub them together until a flame was kindled.” [5. Hutton, Ronald. Stations of the Sun: A History of the Ritual Year in Britain (p. 221). OUP Oxford. Kindle Edition.]

Professor Hutton is however dubious about the ancient provenance of the practise and provides no further evidence as to the composition of the fire itself other than it was “ of nine different trees”.  Which to be frank is a little frustrating as it leads me to believe that this may be somewhat of a modern practise. Of course, that doesn’t necessarily mean that it is bad or that we should discard it. I have spoken at length about the worth of modern festivals before (you can read it here). But what it does mean is that perhaps we do not necessarily need to enslave ourselves to the commonly accepted ideas either.

Therefore as I rather like the Seven of the Eight woods described in the “Choice of timber poem” I will happily include them in my Bel fire, however with the scarcity now of Elm I would probably exclude that wood in favour of Holly and as my Bel fire is just that, a Beltane fire, I would of course include Hawthorn.